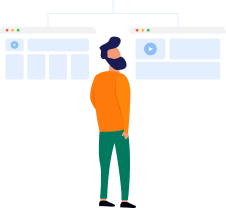 We recently tested two videos side by side that had the same voice, and the same lead, story and product reveal, but had two main differences:

So, for this test, the script was the same up to the point where the offer was revealed (in our case, at minute 16:45), but video B had a higher production value, using a model in front of the camera, subtitles and a green screen.

Considering how much “nicer” it is to have a model in camera, we were expecting to see a higher engagement on video B and, if anything, a difference coming in at the moment of the offer reveal.

But we were really surprised with the actual results.

In this case, what was most interesting was that viewers dropped significantly at the beginning of the video on the second version. By 0:35 we had 49% of audience engagement, compared to 68% in the original.

So, we ruled out this being related to the offer, which wasn’t revealed until way later in the videos. Of course, the offer might have affected results as well, but the difference in the audience drop at the beginning of the video showed us that the problem with video B was different.

It also wasn’t the message, as the copy was exactly the same until way further into the video. So it had to be the person in front of the camera.

Having an original video that was mainly stock footage and pictures, and text on screen with some animations, this came as a surprise, as we thought a higher production value would increase the engagement on the new version, but it obviously didn’t work that way.

After analyzing these results, we might consider these next versions of the video to test against the original:

Testing these new changes will let us go deeper into why our higher production value video didn’t work as expected.

Hadn’t we used the Compare View in Vidalytics, we might’ve keep thinking that the problem was the new offer, not thinking that maybe our “fancier” video was actually pushing potential customers away.

Vidalytics Compare View was instrumental in allowing us to discover what was going on in this case and it helped us call this test faster than we would have otherwise, saving us ad spend and helping us make decisions quickly.

Have you used our Compare View yet to help you analyze split test data for your videos? If so, did you find any surprises? Let us know in the comments below

And if you haven’t tried Vidalytics yet… the time is now!

Don’t waste any more time or money trying to figure out how your videos will do on a head to head split test. Use our Compare View and take advantage of its powerful insights that’ll help you cut losers faster and move on to the next experiment.

Ready to Increase Your Conversions?

Golden Tree Nutrition wanted to find the best video player for Video Sales Letters with autoplay on both mobile and desktop.

We recently tested two videos side by side that had the same voice, and the same lead, story and product reveal, but had two main...

From March 23rd until May 26th we tested Vidalytics against Wistia in an A/A split test, meaning we used the same video on both...

The most interesting thing about this test was actually what we learned from the test we carried out right before it. In that one...

When comparing AWS to Vidalytics, it may seem like it is apples to apples, but this couldn’t be further from the truth… At least if you care...